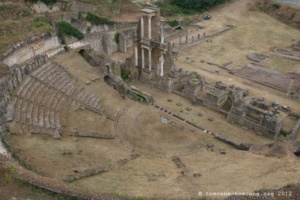 Volterra is a municipality in the province of Pisa of about 11,000 inhabitants. It preserves an important historical center of Etruscan origin (from these ones remains the Gate of the enclosure), with Roman ruins and buildings of the middle ages like the Palace of the Priori in the main square of the same name, or the Cathedral .

The city was under the Romans a municipium, then an influential episcopal seat from the fifth to the twelfth centuries.

It was for a long time under the domination of Florence and the Medici.