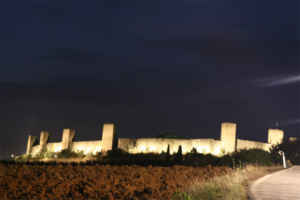 The small medieval fortified town of Monterrigioni has a castle surrounded by an enclosure with 14 towers.

Situated near Siena, in the Middle Ages it used it as a fortress on the road to Florence, to protect itself from this one.

The castle was built at the beginning of the 13th century and has known for centuries the conflicts between Siena and Florence.
A medieval festival takes place every year in July.

In the tuscan countryside, Monteriggioni
The Palio of Siena
Chianti region