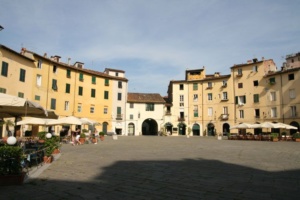 Lucca is one of the most beautiful artistic cities of Tuscany, a step that can not be missed in an itinerary to discover the region.
The city can be visited in one day, but a few days allow to appreciate all its flavours. It can also be a base for exploring central or northern Tuscany.
Located in a plain at the foot of the Apuan Alps, it is less than half an hour from the coast of Versilia, and close to Pisa.

Most of the attractions of Lucca have been left by its ancient history: from the Roman amphitheatre whose traces are visible in the shape of the square Piazza Anfiteatro, the archaeological remains found under the church of San Giovanni e Reparata dating from the twelfth century, and the various towers and villas built between the 12th and 16th centuries.

The walls that surround the city are particularly well preserved, compared to other cities of Tuscany. It has become a pedestrian zone, the occasion of a beautiful walk, on foot or by bicycle.

There is also Piazza San Michele with its beautiful church of San Michele in Foro, the Basilica of San Frediano, as well as the Tower of the Clock and the Tower of Guinigi, to mention only a few sites.

In the vicinity of Lucca, there are Versilia and its beaches, the beautiful Barga Garfagnana and the Apuan Alps.