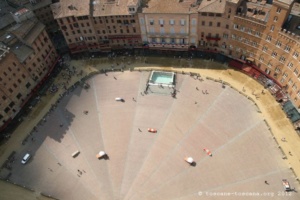 Siena is a medieval town in the heart of the green Tuscany, between the hills of Chianti and the hills of Crete Senesi, which today has about 54,000 inhabitants.
It is an exceptional city thanks to its look of the Middle Ages from which it has preserved a large part. Its buildings go back to the period from the 12th to the 15th century.
Its historic center, around Piazza del Campo and the Duomo (Cathedral), is a UNESCO World Heritage Site, recognizing its artistic heritage and unique medieval architecture.

Siena is known for hosting the Palio, a traditional equestrian race, which twice a year pits the city’s historic districts in an impressive competition around Piazza del Campo (2nd of July, and 16th of August).

In addition to Piazza del Campo, one of the most beautiful squares in the world, with its shape like a shell, with the Palace of the Palazzo Pubblico and its tower, the main monuments of Siena are the Duomo (Cathedral), the Church of San Domenico, and St. Catherine of Siena.