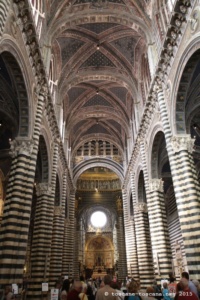 The Cathedral of Santa Maria Assunta is one of the most stunning and beautiful churches in Italy, with its white and black stones and marbles.
It was built from 1136 to 1382 in the historic center of the city. A great nave remained unfinished because of terrible setbacks like the plague of 1348. If it had been completed as planned, it would be the largest Christian church in the world.
This duomo is characteristic of the Italian Gothic of the thirteenth century, with however a 12th century base that is Romanesque.
The interior is full of decorations and masterpieces, many of which are from great masters such as Donatello, Pisano, Pinturicchio and Michelangelo.

The façade was designed by Giovanni Pisano and built at the end of the 13th century. It is composed of white, black and red marbles, its three portals and colonnades are richly decorated with fine sculptures.
The campanile, in black and white marble, with a hexagonal Romanesque base and a polygonal lantern, was made by the architects Agostino di Giovanni and Agnolo di Ventura.

Inside, the choir and its high altar are by Baldassarre Peruzzi (1506). There is a statue of St. John the Baptist carved by Donatello.
The pavement extends over 3000 m². There are 37 marble inlays representing the sibyls.
We can mention The Chigi Chapel (1661), devoted to the Virgin of the Vow, and the pulpit from Nicola Pisano with its columns of porphyry and green marble, the seven panels depict episodes of the life of Christ.
The Libreria Piccolomini, from 1495, was the library of Cardinal Francesco Piccolomini (before becoming Pope Pius III). Its frescoes were realized by the Pinturicchio.

The crypt of the Duomo was rediscovered in 2002, it was buried to consolidate the soil.
The baptistery San Giovanni, located under the apse, is accessible on the lower level of the street, at the back of the cathedral.