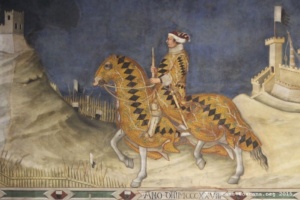 Although it seems that the Etruscans had occupied the territory of Siena, its foundation dates from the time of the emperor Augustus where a Roman colony was established under the name of Siena Julia.
The earliest document mentioning the city dates back to 70 AD in the Book IV of the Historiae of Tacitus. He reported the official visit of a Roman senator who was badly received there.

During the early Middle Ages, we know that a diocese was instituted there.

It was towards the 10th century that Siena took off to become an important medieval city, taking advantage of its advantageous position at the junction of commercial roads leading to Rome.
In the twelfth century, the city became a commune of consular type. It extends its territory and began to enter in conflict with Florence for the domination of the north of Tuscany.

In the first half of the twelfth century, Siena was an important commercial center, with good relations with the Church of Rome. Its bankers prospered, often offering their financing services to the Roman authorities.
At the end of the 12th century, Siena, who supported the Ghibelline cause for the Pope and against the Emperor of the Holy Roman Empire, was again opposed to Florence. After a victorious start, this conflict turned to its defeat with the battle of the Colle del Val d’Elsa in 1287. The government then passed under the domination of the Guelphs with the establishment of the Government of the Nine. Under the administration of this government, Siena has reached the top of its splendor, both economically and culturally.

The slow decline of the Sienese Republic began after the plague of 1348. In 1555, the city went to the domination of Florence.