Visits in Montepulciano and around 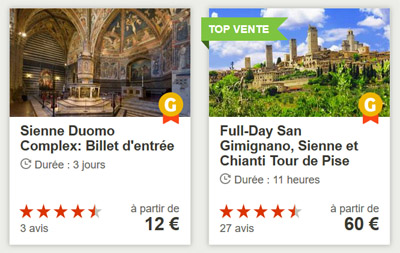 Visits and guided tours in Tuscany

This is a selection of guided tours, coupons or commodes in Tuscany. Consult the sections dedicated to each destination to have a more precise offer on each city or destination. 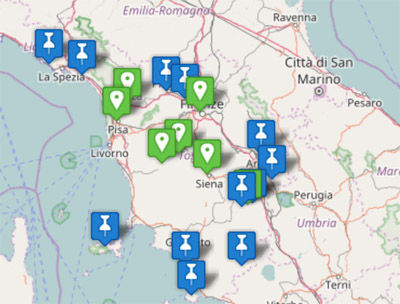 Map of all the destintions In green, the main destinations, in blue others sites

The sanctuary of La Verna is located in the east of Tuscany, on a wooded hill in the foothills of the Apennines. It was founded by St. Francis of Assisi, who received these lands as a gift from a lord. The place, surrounded by the forest, is conducive to meditation. In a small cave, a […]

San Miniato is a pretty village of character, located in the Val de l’Arno. The village has a 13th-century castle built under Frederick II, and a 12th-century Romanesque cathedral with majolica inlaid facade.   Map Into the same category

Capital of the Tuscany, Florence has about 375,000 inhabitants. It is crossed by a river, the Arno. It is considered as the cradle of the Renaissance, an important artistic, architectural and cultural movement which grew there in the beginning of the 14th century. Its heritage is strongly marked by its historical buildings, monuments and very […]

Pisa is a city of Tuscany with about 90,000 inhabitants. It is the seat of three universities. The river Arno crosses it. Famous for its leaning tower, it has many other things to offer. The most important place of the city is the Place of the Miracles (Piazza dei Miracoli). In the Middle Ages, Pisan […]

Siena is a medieval town in the heart of the green Tuscany, between the hills of Chianti and the hills of Crete Senesi, which today has about 54,000 inhabitants. It is an exceptional city thanks to its look of the Middle Ages from which it has preserved a large part. Its buildings go back to […]

Tickets and guided tours in Siena

San Gimignano is a small tourist town of about 7,100 inhabitants located in the province of Siena. It is known for its unique medieval architecture, including its towers. His qualities have earned him an inscription in the patrimony of the humanity of Unesco. Originally, the towers were much more numerous. But many were destroyed with […]

City of goldsmithing for centuries, Arezzo was partly rebuilt after the Second World War, its medieval center having been seriously damaged. Before the Roman period, it was one of the largest Etruscan cities, producing art objects, including the Chimera of Arezzo which is now in the archaeological museum of Florence. Independent commune, it became one […]