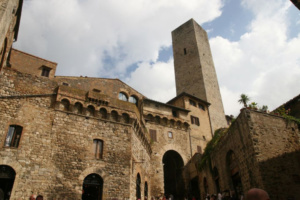 San Gimignano is a small tourist town of about 7,100 inhabitants located in the province of Siena.

It is known for its unique medieval architecture, including its towers. His qualities have earned him an inscription in the patrimony of the humanity of Unesco.

Originally, the towers were much more numerous. But many were destroyed with civil wars and battles, it was the same case for the other cities of Tuscany such as Bologna, Florence or Pisa (where there are no more towers than in San Gimignano).
From the 72 built in the Middle Ages, there are 13 still today.

Two sites have to be visited : the cathedral (duomo), and the Palazzo communale and its museums.