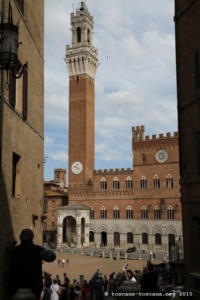 Piazza del Campo is undoubtedly one of the most harmonious squares in the world.
Its layout lasted from 1293 to 1349. Its beautiful paving of red bricks is shell-shaped and split into nine sectors which symbolize the Council of Nine, the organ governing the city of Siena, at the time when the city was independent and at the top of its power.
Surrounded by medieval palaces, the square is dominated by the Palazzo Pubblico palace and its 102 meter high medieval tower dating from 1342. It is the second highest tower in Italy. The Palace where the administration of the city was practiced is currently the home to the Museo Civico (Municipal Museum).
At the opposite side, the Palazzo Sansedoni was built by assembling palaces of the first half of the thirteenth century.
This square is where the equestrian event of the Palio takes place, on 2
nd of July and the 16th of August.

The fountain Fonte Gaia, inaugurated in 1386, was the first public fountain in the city. It was embellished in the 15th century with the statues and reliefs of Jacopo della Quercia, an original style, between the Gothic tradition and the innovations of the Renaissance.
The present sculptures are copies (realized by Tito Sarrocchi in 1868).

From the top of the Torre della Mangia, you can enjoy a splendid view of the square and the city.