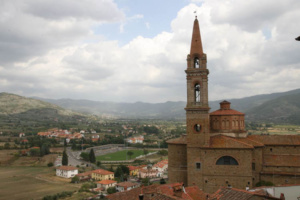 Castiglion Fiorentino is a small town of Tuscany, situated on a hill between Cortona and Arezzo, which has about 13,500 inhabitants.

The region of Castiglione was already occupied in prehistory and developed in the Etruscan era as early as the 6th century BC as a crossroads between the two cities of Arezzo and Cortona. The center was located on the hill near the current dungeon. The Etruscans embellished the whole of the Val di Chiana, like in Brolio.

Under the Republic, the Romans exploited the fertility of the region for their needs, but with the reign of Augustus, the flooding of the Tiber in Rome led the Romans to obstruct its tributaries, including the Clanis. This caused a stagnation of water which made the valley unsafe.
A free commune in the twelfth century, in the Middle Ages and up to the Renaissance, Castiglion suffered wars between the great neighboring communes such as Siena, Florence and Perugia.