The square Piazza dei Miracoli of Pisa, now called Piazza Duomo, is listed as a World Heritage by Unesco. Earth was brought back from the Holy Land into the Middle Ages by pisan sailors. Which gave the place its sacred character, the earth being supposed to have been trodden by Christ.
The cathedral (duomo), the baptistery and the famous Leaning Tower stand there – not very straight – This one is 55 meters high and dates back to the 12th century and began to bend as soon as it was built. Like all buildings in the square elsewhere, due to a particularly loose soil. 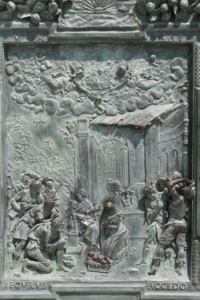 The duomo, built in marble between 1064 and 1118, is in Romanesque style. It was the symbol of the prestige of the Maritime Republic of Pisa, when it was at the top of its power.
Its bronze portals were created by Bonanno Pisano, the pulpit is by Giovanni Pisano.

The baptistery is dedicated to Saint John the Baptist. It was built in 1152. It is the largest in Italy with a perimeter of 107 meters and a height of about 55 meters.
The exterior is essentially Gothic.