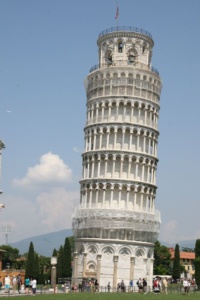 The famous Tower of Pisa is located on the Piazza dei Miracoli (or Piazza Duomo). It is 56 meters high.
The beginnings of its construction date back to the 12th century, but it continued until the 14th century.
It is actually the campanile of the cathedral of Pisa.
At the end of its construction, the tower was already beginning to lean, due to a very loose soil.
Today, its inclination is about 5 °. To prevent it from tilting further and to risk breaking, 900 tonnes of lead counterweights were installed during a consolidation that lasted from 1990 to 2001.
The facade of the tower was recently restored in 2010.