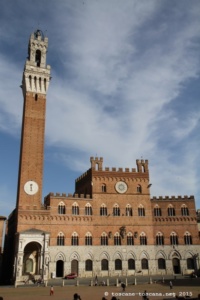 On the Piazza del Campo square, the Palazzo Pubblico palace was built between 1297 and 1310 by the Government of the Nine as their own headquarters.
Nowadays, it is still the seat of the town hall. The floors are occupied by the museum Museo Civico where one discovers in particular the rooms of the former government of Siena. These are decorated with sumptuous frescoes linked to the history of Siena including the famous fresco of the Good and the Bad Government.

The Torre del Mangia tower is 102 meters high, built by the Rinaldo brothers and finished in 1348. It is the second highest tower in Italy.
From the top of this one, one enjoys a splendid view on the Piazza del Campo and on the city.