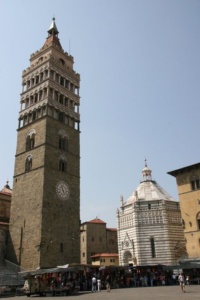 Pistoia is a town of about 90,000 inhabitants in the north of Tuscany, located at the foot of the Appenines mountain.
The city was a Roman oppidum, but earlier traces of Ligurian and Etruscan occupation were found. The city had its own bishop in the 5th century under the Byzantines.
In 1254, Pistoia being ghibelline, it is conquered by the guelph Florence.
The medieval town center preserves several remarkable palaces and churches: