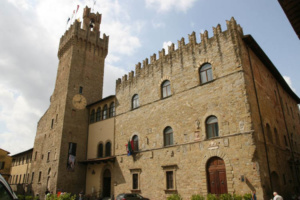 City of goldsmithing for centuries, Arezzo was partly rebuilt after the Second World War, its medieval center having been seriously damaged.

Before the Roman period, it was one of the largest Etruscan cities, producing art objects, including the Chimera of Arezzo which is now in the archaeological museum of Florence.

Independent commune, it became one of the main regional cities in the eleventh century. Confronted with the Florentines, it lost its power in the 14th century and finally was annexed in 1384 to the Duchy of Tuscany dominated by Florence.

The most important monument preserved here is the church of San Francesco where Piero della Francesca painted his Legend of the Holy Cross (in the apse between 1452 and 1466).

Other artworks can be found in Arezzo, as the stained glass windows of the Duomo and its Marie-Madeleine fresco by Pietro della Francesca, the crucifix of Cimubae in San Domenico, and the polyptic of Lorenzetti in Santa Maria della Pieve.

Monuments and tourist attractions in Arezzo