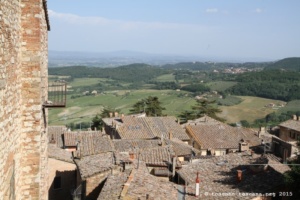 Montepulciano is in the province of Siena, not far from Pienza, in the south of Tuscany. This small town of nearly 14,000 inhabitants, is medieval and Renaissance style, amidst beautiful hills, at an altitude of 605 meters.

The town is known for its gastronomic production, including its wine, the Vino Nobile di Montepulciano, which is considered one of the best in Italy. It is also known for its cheese and sausages, pasta, honey and lentils.

Probably inhabited by the Etruscans, the city was developed especially in the Middle Ages. The historic center is surrounded by 16th century fortifications.

Montepulciano is also interesting for the beauty of its historical center and its Renaissance palaces.

Among the main monuments of Montepulciano: